DE have next to no armour, and the model range is limited and not very good quality. They also don't perform as well as most people expect they do against a good player.

However, I've always like the tau for the models, and will always have a soft spot in my heart for the ease at which ork stuff can be made and houseruled.

chaos space marines,
it's a bit of a noob army, because they are essentially space marines but cool, and for being so, are missing most of the space marine stuff, (as well as taking out the different legion rules, for example iron warriors, or thousand sons)

chaos demons,
they have to deep strike, which means for those who only have close combat, their a bit poo.

tyranids: the old codex was better

eldar, the codex is layed out even more stupidly than the demons one.

i like necrons became they'll be back, an army consisting of a necron lord with resurrection orb, and units of necron warriors around is a simple cost effective army, which s difficult to beat. and if that style of play doesnt float your boat, because of the lack of choices and the similarity of their models, the models can be really easy to convert, for example, buy a pack of 20 warriors, you can make 10 immortals and 10 flayed ones.

I have to concur with Disposable's post about Chaos Marines.

Tau: I've lost to grots in close combat. Etherals are all round crap and they only have a few tanks.

I've always liked Imperial Guard, it doesn't matter if you loose a guardsmen and the sentinel is my favorite model.

The imperial guard don't really have an interesting play style for me, and the tanks are too pricey but required. The new sniping rules also make them crap, so you're better off using the points to buy a new guardsmen.

The eldar do seem an elegant race, and for all the gay jokes, I actually do like the models and paint jobs I've seen. They're also not as grimdark as others, which is nice.

I like the Harlequins, and they look amazing when there properly painted

'When Hive Fleet Kraken invaded the galaxy, Iyanden was directly in its path and was too slow to outrun its advance. The craftworld's Farseers found themselves regretting the disappearance of their fleet's greatest asset. Word of Iyanden's situation managed to reach Yriel despite the psychic blockade around the craftworld caused by the Tyranid's Shadow in the Warp. As Iyanden was on the verge of annihilation, Yriel tempered his anger towards his former home and returned to aid his people. The arrival of Yriel and his fleet tipped the balance of the space combat towards the battered Eldar, and the reinforced Eldar fleet managed to destroy all the proceeding Tyranid waves before they could board and unleash their cargo upon the craftworld. Eventually, no more Tyranid ships came; the Hive Fleet had been destroyed. Yriel and his forces then landed on Iyanden itself to help clean up the invading creatures. Yriel set his eyes upon personally slaying the monstrous Hive Tyrant leading the Tyranid horde. But the creature was so powerful it could not be killed by mortal weaponry. Yriel, from a statis field in the Shrine of Ulthanash, pulled the ancient Spear of Twilight and charged after the Hive Tyrant. As the Eldar lines were on the verge of being overrun, Yriel slaughtered his way through the Tyranid horde to the Tyrant and drove the spear into the monster's gaping maw and through the back of its skull. With the death of their Synapse leader, the Tyranid swarm was then easily defeated. But Yriel had doomed himself in the process, as the Spear of Twilight was cursed to eventually burnout the wielder's soul and once taken it could not be abandoned.' 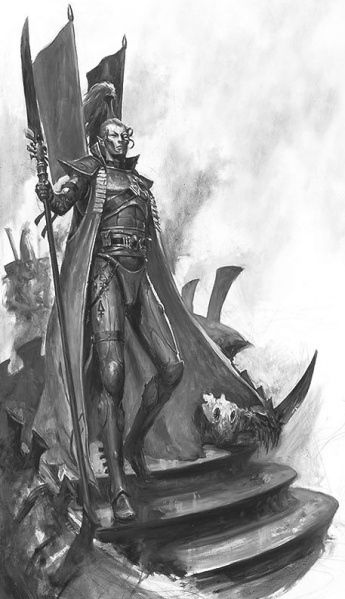