They call us blind, and heathens. They call us lost. We are not lost! We are the one within the light, and they shroud themselves in darkness! -Cheif Librarian Rolland De'Wolf.

It began on Caliban. Luther had split from the Lion. He declared that Caliban was free, and we believed him. Then the angels fell on wings of fire again, but it was not to save us. Retribution was at hand, and only one side would prevail. Brother Fought brother, and the very machines of the Emperor screamed, as weapons they had known turned upon them. It was devestation. I am Rolland De'Wolf. I was a Librarian, the last one. I was there, when the Angels fell from grace. I was a last ditch effort, to help stall the tides of what would be called Loyalist, then disaster struck. Luther struck down the Lion. We cheered, but I saw it. He began to cry over his broken brother. I knew then, we were damned. Then the warpstorm came, and we were swept away. It was the last time I saw my brothers.
I was lost, thrown into the warp, and prey to the beast within. Tides of hate, and desperation crashed against me. Feelings of great joy, and unbelievable sorrow. Time was lost on me. I saw glimpses of the outside, as I fought off beast of indescribable horror. Finally, I found a rock in the storm. It was a city. I began to believe I was mad, my sanity taken from me by the beasts I had broken. It glittered like gold, yet shifted like water. There was no one. No beast, demons, or lost souls. All was quiet.
I had traveled deep into the city, yet seemed to get lost the more I seem to oriented myself. Eventually, I collapsed. I knew my doom was upon me, and I was cursed to die at the hands of the beast of emotions. Then I heard it. It sounded like a thousand angels, singing to me. They spoke with a thousand voices, but the words were the same. "I see you lost angel" they said. They told me such sweet things, and such horrible truths. Then, they asked something. "Remove your Aegis." I was stunned. "But, I will be lost" I replied. "No," they spoke "You will be found." I did as I was told, and they rushed upon me. Demons.
Rushing into me, I could feel myself being overwhelmed. They ripped, teared, and giggled. I was dieing, ever so slowly. "No." were my last words. Then, they were gone. I looked, to see them screaming mutely, as if in horrible agony. "Be released great Angel, let loose your wings and take flight" the voices said. Then, I was gone. I was falling, and fast. Yet, I sored before I hit the ground. I look to see I had wings. Real wings!
From that moment on, I knew what to do. I was the Angel of Retribution, and my target was vast. With my fellow Fallen Angels, I was to bring retribution on our erstwhile brothers, and tear down the hollowness of the Imperium.
I am an angel. I soar on wings of light, and it is not peace I bring. I bring only war. 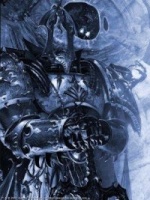 Nice story! You have succeeded in actually including punctuation which is more than can be said by most (Disposable Hero) But I really like it as a storyline for the leader of renegade angels, post some pics of the army up somewhere and write an army list (Should be good to see what models your using) Also, are you using the chaos codex or the space marines one?
_________________

Just read that, that's brilliant! Have you considered the rules for that saint in WH codex? Might suit the leader. But seriously, that is really good, it's an honour to have you on board.

And hey, mine had punctuation too!

I was mocking Tom..... but indeed, you may consider making rules up for the librarian or using rules from another model, mind you if your using the chaos codex, you can actually give him wings ^_^ Also, if you want, you can make a character of yourself (Take a look at some others first) For the Legion codex, have fun ^^
_________________

It uses a combo of chaos and normal space marines. It gives flexability, while having regulations. I'm not allowed the run of the mill really scary chaos stuff, and none of the "holier than thou" space marines. I am thinking of using chaos mostly for the hero, for he actually has angel wings and a retinue that will have the same mutation.

Seems good, post us up some rules? Not in the legion codex area, unless you want us to add them in. We need vehicles, heavy and fast stuff now. And maybe some elites too.

well, then if i had to choose one, id have to go with chaos wouldnt i?

Aye, I fully agree. Though, it really depends who you play with. I've never had any problems playing rebel guard (witchhunter adversaries and imperial guard) with my friends. And I doubt they'd have an issue with me playing Tzeentchi Dark Eldar (lower initiative by 1, give 5+ invulnerable save, increase cost by 10%, rounded up).

So play both with your friends, and ask before the battle. Works for me.

Well, id only use the space marine codex to get use of assult marines, for you can only have one squad of raptors. Id also like the drop pod ability, and i still have no clue how to figure out points for chaos termis

Usually for cross-codex abilities I use the closest match from the codex with the ability, and add a reasonable percentage, around 10-20% should do it.

What? You can have more than one squad of raptors! I've seen people use assault marines for them all the time, the only thing is you wont be able to do cross codices in GW, they wont let you but in friendly games outside GW, you should be ok
_________________

Not with the codex i had, though i think it was last edition. It specifically said only 1 squad of raptors, only Night Lords could have more.

No limit in the Chaos Codex I absolutely didn't torrent.

Ya, i actually have the codex now, so i can just use the chaos codex.

Ah good, let us know how it goes.

whered you get the torrent?

_Chaos_Space_Marines.pdf]Here. Though I used the magnet links, saves me from download history clearing.

know where i can find a grey knight one?