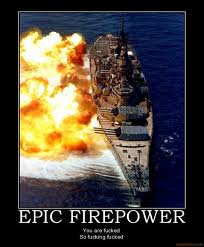 Go for it, then. I'll field GKs. Joraeko's, Psykers, and Corteaz, like a boss!

"Problems? Problems!? There is no problem I can't solve with this!"
- Mad Chainsaw Johnson

"Violence. If it's not solving all of your problems, then you simply aren't using enough of it."
- Unknown

"Dude, I've got a list of people who are going to survive. It's not into double digits."
- Me, of all people

Necrons certainly, their most basic troop is more powerful than any other troop choice in the game; it can even come back to life. Their most basic weapons can destroy vehicles and need I say again metal resurrecting uber skeletons? Whilst I don't play as them I can recognise that within the 40k story Necrons would emerge victorious.

They destroyed the galaxy in the time of the Old ones with ease and simply slept until more life emerged. It's an endless cycle to feed the C'tan and they do it very well. They are one of the only armies that can truly do away with the ever multiplying Orks because gauss weaponry obliterates the spores an Ork releases upon death.

Tau are for want of a better word, fucked. They have a warp storm they refuse to acknowledge above their home planet, they have two Tyranid hive fleets encroaching upon their position, plus they have WAAAGH! Grog making a beeline towards them. Being a very under populated race not even their fancy plasma can save them.

Dark Eldar and the Chaos Daemons would survive the longest I think, simply because they have the warp and webway to hide within. Of course after time I'm sure the Necrons would devise a way to close the warp once and for all; and being immortal machines they would waste no time in prowling Commoragh obliterating everything living. That does remind me however, being resurrecting machines the Dark Eldar would receive no sustenance from destroying them meaning eventually they would wither away.

I'd say more but I don't want to be spammed with tl;dr.